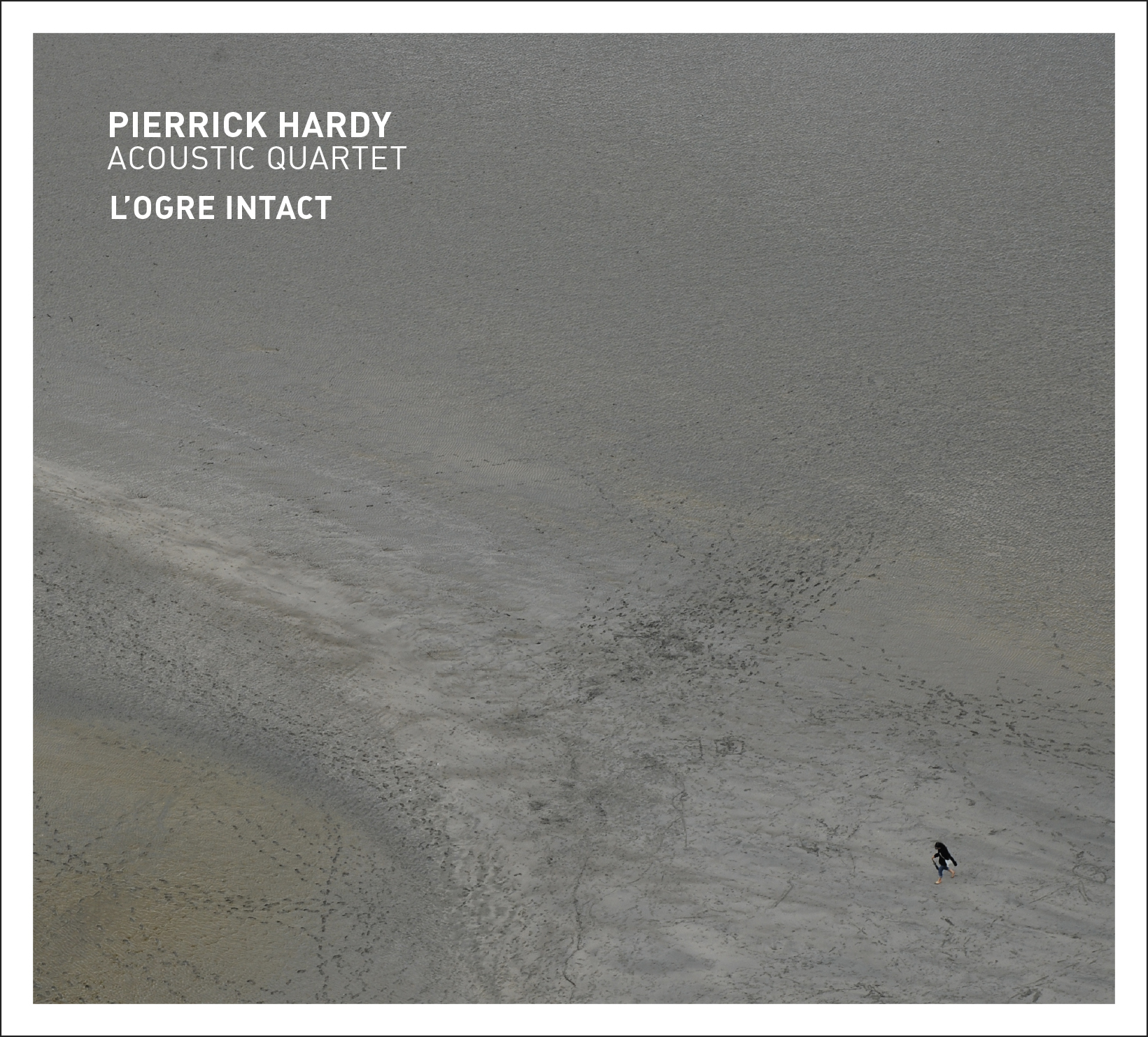 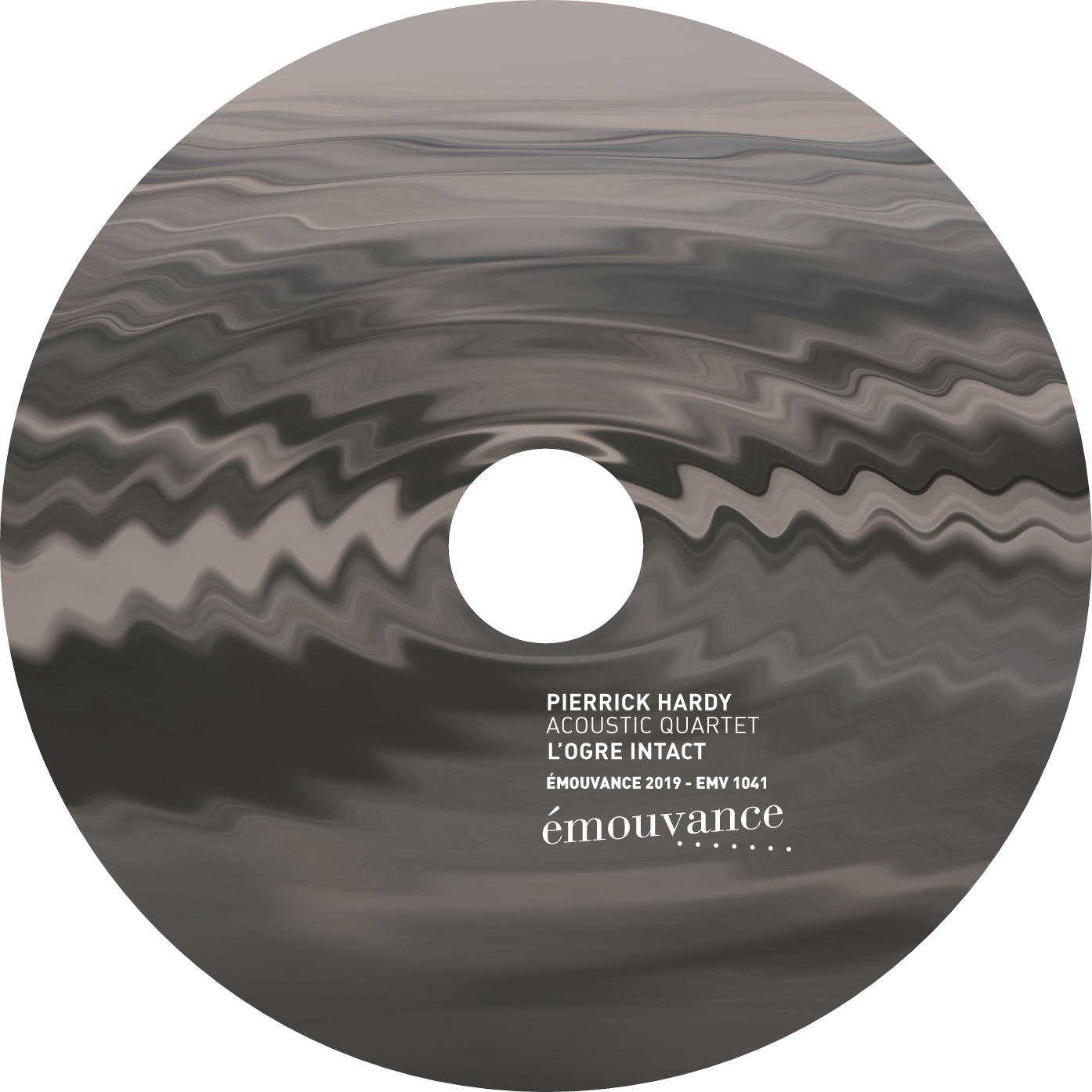 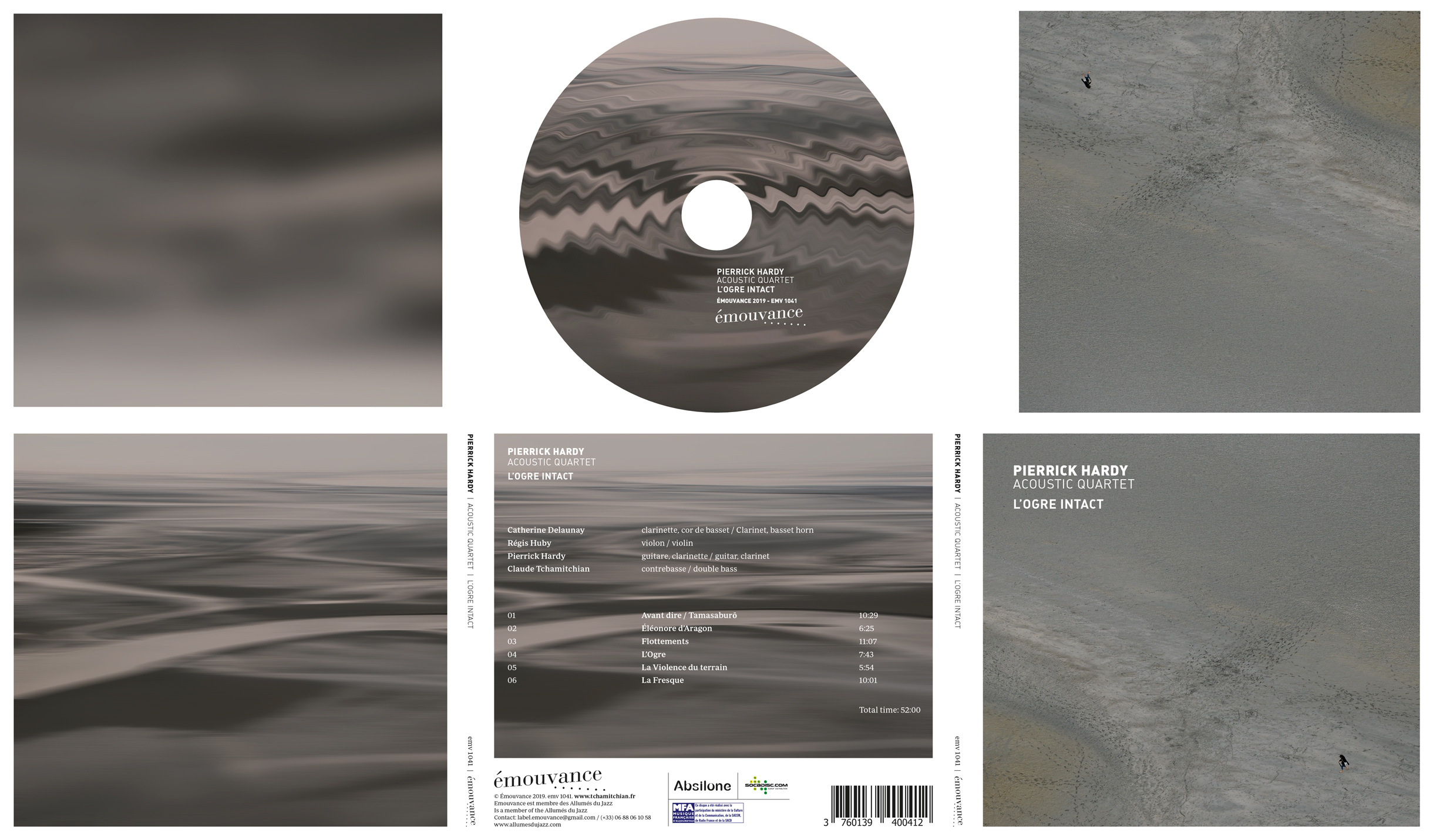 L’Ogre Intact
The most overwhelming and impressive quality in Pierrick Hardy’s proposal in L’Ogre intact is perhaps its thorough honesty, and – if one may say so – its radical modesty.
Indeed, we are immediately caught by the extremely moving feeling that we’re in the presence of a musician who is always careful not to cheat in his musical expression and doesn’t allow himself a few empty notes, just as others allow themselves a few empty words; in short, he resists that so common temptation, nevertheless often shared by others, whereby pushing himself forward means putting on a few flattering masks, rather than confronting himself and delving down into the depths of his own inner reality, haunted though it may be by some familiar demons one does not want to see raised again. Pierrick Hardy – and this is where his real strength lies – faces up to this confrontation, and paradoxically, does so boldly by deciding quite simply to “compose” from and with who he is: the sum of all his experiments and experiences; his vast musical knowledge and culture; his references and influences – but also his limits, difficulties, blind spots, sense of modesty, repressions and fears and then, like a single underlying theme, his more or less hidden, shameful even, moments of anxiety and distress. . .

And yet nothing improper is offered, quite the contrary in fact. For all its lack of pretence and the absence of any real safeguard in its constant aim for sincerity, Pierrick Hardy’s art does have its detours and a certain “aloofness”. All the themes on this CD resemble studies or introspective dreams taken from the pages of some private note- and sketchbook, so that each one can be heard as a commentary or musical “correspondence” to works in other art forms. Whether the subject is the haunting beauty of the hieratic ritual of the great kabuki drama master, Tamasaburō or the amazingly delicate finesse of the bust of Eleanor of Aragon, or the macabre frenzy of the baroque fresco, The Triumph of Death, in the Abatellis Palace in Palermo, in Pierrick Hardy’s efforts to grasp the origins of the inner tremor that forms his base and moves him forward in his creative process, he passes systematically through someone else’s experience, so as to set his own little theatre of emotions in motion, and this filter protects and inures him against any impending sentimental effusion or ego-based exhibitionism, allowing him to elaborate some exquisite miniatures with obsessive precision in design as well as gesture. He achieves his aim by rigorously developing subtly sophisticated compositional arrangements to give true form to something that would otherwise be either less polished in its finish, would fade, or even inexorably sink back into oblivion.

This overwhelming “restraint” at the heart of Pierrick Hardy’s aesthetics could be its limits and a pitfall verging on autistic formalism, were it not that he is sharply aware of this and also, through a second detour just as decisive and creative, that he literally addresses his music to his friends, so they will not only be responsible for its style in the strict sense of the word, but also for embodying it and putting it into “play” again through the prism of their very diverse personalities and respective personal histories.

As though hidden at the heart of this small band with its airs of a chamber orchestra highlighting the infinitely varied sound palette of Catherine Delaunay’s clarinet, the glowing, dark red lyricism of Regis Huby’s violin and the animal-like, (but a tame animal!) wildness of Claude Tchamitchian’s double bass, in comes Pierrick Hardy with his flowing, rhythmic guitar and its unfailingly melodious music, certainly embellished by his invitation to the others to unfurl and reveal its hidden beauties. And this even though he’s deliberately directing the moods of a music that is perfectly clear in in terms of narrative and drama, it is always totally assumed. In L’Ogre intact Pierrick Hardy, in his unassuming way, builds improbable bridges between Messiaen’s Quatuor for the End of Time, Jimmy Giuffre’s open, freedom-loving jazz or even the baroque folk music of John Renbourn. The result certainly suggests a sort of breviary of his qualities as well as a very personal map of his influences – but above all, what he does here in this eminently collective process he’s embarked his fellow-musicians on, is to set out on a metaphorical but very real journey towards a certain form of truth (and that’s really the great lesson of this music in the end!), and the journey is all the richer for being shared.
Stéphane Ollivier